As you scroll down the page you will find a list of all of our Double Elimination Tournament brackets. These are available in both Seeded and Blind Draw formats. All of our brackets are available to print for free, and if you visit our store some of them are also available on large 24" x 32" prints. If you're interested in editing the whole bracket in live mode, check out our Fillable Brackets. When using most of our free printable versions, once you have found the correct bracket, you will have two options. You can either just print the bracket or you you can click "Customize this Bracket", which will allow you to quickly edit the title of the bracket and print. You can see this in the image below. 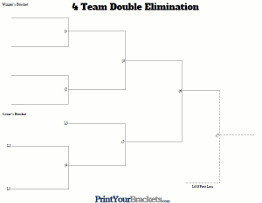 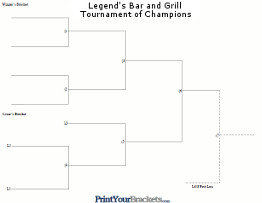 
If you are not familiar with running double elimination tournaments, the above illustration and the comments below should help guide you through setting up and running your tournament. The bracket above is a 16 Team "Seeded" double elimination bracket. The same idea is used for all brackets, not matter what the number of participants are.


A: The letter "A" points to the "Seeds" of the tournament, if you have pre-ranked your participants based on strength or a season record you would put each team's name on the corresponding line. If you are printing a blind draw bracket these numbers will not appear on the bracket, but the rest of the bracket will be exactly the same.


B: The letter "B" points to the order in which the games are to be played. Simply start by playing the game labeled (1) and continue until all games are completed.


C: The letter "C" points to the position where the loser of each game would move to. These are labeled L1, L2, L3 ect.. All you have to do is look at the Winner's Bracket to see what game number was played, and the loser of that game would drop down to the corresponding location in the losers bracket.


D: The letter "D" represents the Championship game. Game 14 in the above illustration is the Championship between the Winner of the Winner's Bracket(Zero Losses) and the Winner of the Loser's bracket(1 Loss). If the team from the Winner's Bracket wins then they are the champions. If the team from the Loser's Bracket wins, then game 15(dotted lines) in the above illustration would be played. Whoever wins that game would then be the champions. We have also created a cool little tool that will calculate the total Number of Games in a Tournament.