How do the NFL Playoffs Work?

The NFL Playoffs are made up of a total of 14 teams. The NFL Playoff Bracket is made up of 7 teams from the AFC and 7 Teams from the NFC. There are four divisions in each conference, the winner of each division will automatically qualify for the playoffs. Those four teams will then be seeded 1 through 4 based on their record(1 seed having the best record and home field advantage). The two highest seeded teams from each conference get byes.

The NFL does not run a "true" bracket, like you see here on the March Madness Bracket or on the NBA Playoff Bracket. I define a "true" bracket as a tournament where the winner of each game moves directly over in the bracket. The NFL Playoff bracket rearranges the bracket in the second round so that the highest seed(1) in each conference plays the lowest remaining seed in the same conference.

Otherwise the bracket plays out true. Here is an example of an NFL Playoff Bracket where the second round shuffle was done. 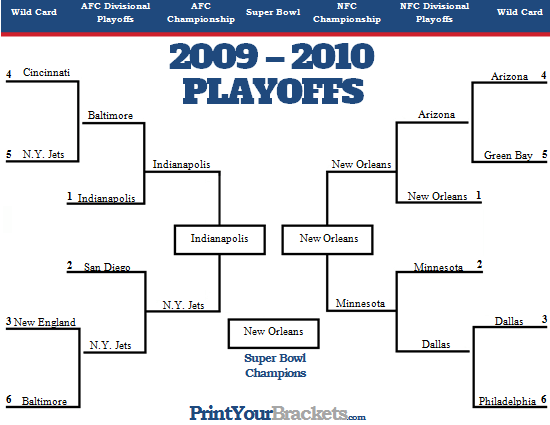 The re-seeding makes it a little difficult to run a bracket style pool, so we recommend trying the Playoff Squares or our Playoff Confidence Pool.